As many as 88% of the population declares that they have access to the Internet at least once a day via smartphone or tablet. On average, we use 10 applications per day. Mobile technologies have irrevocably grown into our everyday life and have quickly become an educational tool, as well as a way to reach millions of users. It’s also becoming a significant mean of science communication. This is not overlooked by institutions all over the world: NASA is harnessing this trend by providing an app through which we can have an insight into the International Space Station - ISS.

Scientists are increasingly willing to use the so-called citizen science, and a smartphone, constantly carried around, can come in handy as a mobile laboratory. This is why researchers at the Seismological Laboratory at the University of California at Berkeley want to use civic contribution to create a global image of seismic activity through the MyShake app. The EDU-ARCTIC Consortium is not lagging behind and has just launched the Arctic Explorer app: smart entertainment for everyone.

The history of the application of the Arctic Explorer Game (available free of charge, currently on Android), created as part of the European project EDU-ARCTIC, is special. The author of the idea is 13-year-old Yngva from the Faroe Islands, who submitted in the competition the idea of ​​creating a virtual journey through the Arctic, which, thanks to the form of a quiz, allows to broaden knowledge about this region. The idea inspired the organizers, and at the final conference of the EDU-ARCTIC project in Paris in May this year, we managed to present the effect and play the first quiz with the international audience.

The virtual journey through the Arctic begins in Svalbard – a place where Poland, under the Spitsbergen Treaty, conducts scientific research, among others in the Polish Polar Station Hornsund. We can choose questions from various domains: biology, geography, geology and science in general, on three different levels of difficulty. If we answer correctly, we collect "coins" that allow to reach in other parts of the Arctic - Iceland, Greenland, Faroe Islands, Scandinavia or North American polar areas. The answers are accompanied by explanations, photos, links to additional materials - for example to POLARPEDIA, a multilingual encyclopedia of terms related to polar research.

But the most important element is the ability to co-create the application by its users - that is, to add questions and answers, which is also awarded with virtual "coins".

How many islands are there in Svalbard archipelago? Since when has the Polish Polar Station Hornsund operated? What is stored in the Global Bank in Svalbard? Play, find out, come up with your own question, and become an Arctic Explorer! 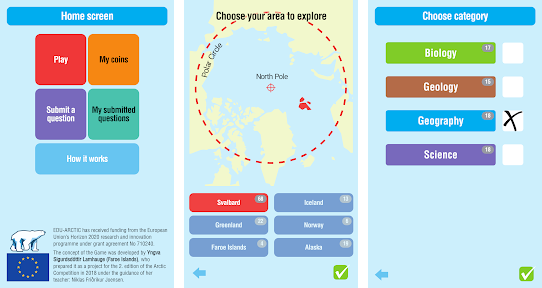